Sgt. Tony Konyha in Vietnam—in uniform on one of the bases he served at (left), and during a moment of relaxation (right).

Carol Konyha’s father, Toby Konyha, was stationed in Vietnam for a year between August 1967 and August 1968, serving as a mess sergeant at both An Khe and Pleiku military bases east of the Cambodian-Vietnam highlands. This was a heavily forested region. Even in the lower coastal areas, in the tropical climate, dense vegetation provided ample cover for the North Vietnamese Army, who were staging attacks from neighboring Cambodia at the time. US military commanders’ institution of “Operation Ranch Hand,” the infamous aerial spraying of Agent Orange and other defoliants in Vietnam, helped eliminate enemy cover and thereby reduce the threat to its combatant forces. [To see an interactive map of spraying missions, visit: Chicago Tribune Watchdog.]

The widespread chemical warfare had devastating side effects, not only for Vietnam’s environment, but for many of the humans caught in the drift. Dioxin, a highly toxic byproduct of the Agent Orange formula, caused permanent health problems, even death, to both military and civilian personnel on both sides of the conflict, including genetic mutations that resulted in children being born with severe birth defects such as spinal bifida and other neurological disorders. Sgt. Toby Konyha was one of those whose exposure to the herbicidal “agent” eventually took a heavy toll on his health and on his family.

In 1973, just five years after his stint in Vietnam, and the same year American troops pulled out of the country, Sgt. Toby Konyha died after being diagnosed with leukemia. At the time of his death, he and his wife Mary had seven children: Dorothy, age 22; Jim, 20; Suzanne, 17; Carol, 8; Ed, 6, Christine, 4; and Dan, 2. In addition to his own illness, Toby’s exposure to Agent Orange led to his youngest daughter Christine being born with a malformed spine and water on the brain, as well as an abnormality that required her to undergo open-heart surgery when she was only 2 years old. The first child to be born after he returned from Vietnam, Christine was conceived in Hawaii, when Mary joined him there for a mid-tour R&R break (rest and relaxation).

Despite her physical difficulties, Christine, nicknamed “Ina,” matured into adulthood and managed to live a relatively full life. She earned a bachelor’s degree in Psychology from the University of Windsor and had a dream of helping children with disabilities and their parents. She suffered a setback, though, in 1997, when she lost her eyesight, a loss directly caused by her birth defects. A shunt implanted as a baby to drain fluid from her brain had deteriorated over time, causing permanent damage to her optic nerves and ultimately, blindness. Ina was just getting her life back on track when she suffered a serious fall, a tragic accident from which she never recovered; she was on life support for nine months before dying at the age of 34. 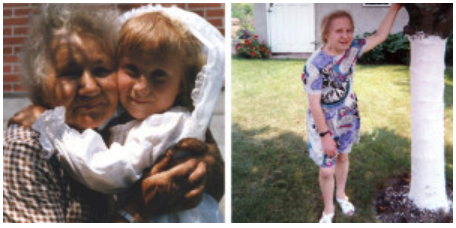 Left: Christine “Ina” Konyha in her first communion dress, with her grandmother, Ida. Right: Ina as an adult.

Brother Ed Konyha describes the ripple effect on their family. “The Agent Orange not only killed Dad, it killed Ina too. Mom was devastated after Dad died and she was never the same again. She suffered terrible and persistent depression after being left a widow and having to raise four young children as a single mother in her forties and fifties…it aged her prematurely.”

Toby and Mary’s middle child, Carol Konyha, lived near her younger brothers in Vancouver, British Columbia in the 1990s, but during the final months of Ina’s life, she relocated to Phoenix, Arizona to help care for her sister. In 2003, Ed called to tell her about a documentary titled The Friendship Village he’d happened to see on Canadian television. Produced by Canadian filmmaker Michelle Mason, it tells the story of George Mizo, the American veteran who played a major role in the founding of the Vietnam Friendship Village, and documents the ongoing tragic legacy of Agent Orange in Vietnam. Mizo himself had suffered serious health consequences from his wartime exposure to dioxin, and passed away in 2002. When she watched The Friendship Village, Carol felt an immediate connection with the Vietnamese families interviewed in the film. The health issues they described were much the same as her own family’s experiences. She subsequently became a regular supporter of the Friendship Village, through VFVP-USA, always dedicating her donations “In memory of Sgt. Toby Konyha and Christine Konyha.”

Three years ago, Carol decided to step up her support for the Friendship Village. She asked herself, “What can someone like me do that would be even halfway meaningful?” She figured she could raise some money within her own circle of friends and family, but felt that everyone was probably already inundated by donation requests. She wanted to do the fundraising in a way that would be fun and appealing. A freelance baker known for her chocolate cake and cupcakes, she finally hit upon the idea of holding a month-long bake sale.

Carol’s first bake sale, held in 2012, brought in close to $400. The next year, she raised $578. In 2014, in addition to a bake sale, she decided to throw a “Christmas in February” party—a celebration she had hosted when she lived in Vancouver, just for fun. Carol said party guests were happy to contribute to “her charity”—Vietnam Friendship Village—and most generously gave more than the $10 suggested. On her invitation, she also provided the option to donate online, and some friends did so. By combining a fun social event with her bake sale, Carol tripled her return, raising $1,487 this year!

VFVP-USA depends on volunteers to help with our fundraising efforts, and to have someone like Carol, who knows firsthand what it means to be a “victim of Agent Orange” is all the more meaningful. We hope her family’s story, and her “fun and appealing” fundraising model will inspire other Friendship Village supporters to consider what they can do.

“The devastation caused by Agent Orange on our family is massive. It goes beyond Dad’s death. It left young children without a father, killed our sister and caused her extreme physical and psychological pain throughout her life, prematurely aged and devastated our mother, and left grandchildren without grandparents. The horror of war and chemical warfare came home with Dad. This is why we relate to those children in Vietnam so well—they are Ina’s mirror image. Their families are our mirror image. We are them and they are us… That recognition is the one silver lining that can be salvaged from all of this: By supporting them, however we can, we heal our own wounds.”